John was a Sternian (1939-1946) who played competitive tennis until his 80s!  He often played in the Sternian matches and when he died, a bequest to the Association funded a trophy in his honour.

The Sternian team won 8-1 but Mr Kimber assures us it was not as one sided as it sounds!  Thanks to all who played 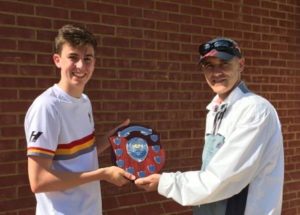