The Lord Wandsworth Preparatory School (Gosden House, Bramley) opened for business in 1920, followed two years later by Lord Wandsworth Agriculture College , so starting the flow of ex-pupils now counted in their thousands who form the basis of the Sternians’ Association. The Trustees dropped “Agriculture” from the name of the College in 1938 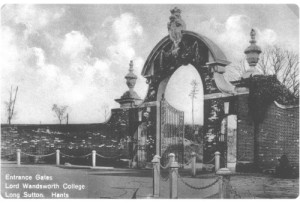 The Wandsworthian produced in 1928 became the first magazine edited by Captain Warner. The Sower magazine was started in 1933 to provide information about the College and leavers in order to keep the LWC tradition alive amongst those who had left. The Sower continued to be published until 2012.

Though visiting ex-pupils were made very welcome it was not until 1935 that this was formalised at a meeting presided over by the Principal Colonel Little. The name Old Wandsworthian Association was chosen and the initial committee was made up of D Smallridge (4) , H Sheppard (27), Les Burbidge (30), Arthur Webb (34) and E Wood (85) with Browno as Secretary and Treasurer, Albert Cartwright (14) as Assistant Secretary, Colonel Julyan as Chairman, Sir Daniel Hall as president and all the staff as Vice Presidents.

It was not until 1950, after a period of considerable staff changes that an August Bank Holiday reunion was restarted but this time under the heading ‘Old Boys Association (Sternians)’ . A committee was formed from representatives of each hundred old boys. From this The Old Sternians’ Association was formally formed in 1952. The name Old Sternians was of course taken from the name of the founder Sydney James Stern, Baron Wandsworth. Funds were collected by Annual Subscription.

As well as the usual officers of Chairman, Vice Chair , Secretary and Treasurer, 7 Regional Secretaries were appointed covering the geographical regions South, West (including Wales), London, East, Midlands, North (including Scotland and Ireland) and Overseas. These regional secretaries were primarily expected to be a focus for all ex-pupils in that region, keeping a record of addresses, collecting subs and, apart from the Overseas region, organising one reunion a year in their region usually at a local restaurant. Subs were mainly collected centrally though. Executive Committee meetings were started, generally in March and October/November each year at Long Sutton, and have continued ever since.

In 1958 the first ‘ Sternian ‘ magazine was produced under a Sternian editor and this has been published every year since. The Sternian has recorded the success of sports teams, news from individuals who have written in, occasional articles and the formal reports from the Chairman and Treasurer.

The main event of the year was and has remained the Annual Reunion at Long Sutton. This originally was held on the weekend after the summer term finished in July but with the arrival of summer schools was moved to the last weekend in June, initially on the Sunday only.

Originally the reunion started on Saturday morning and ran through until Sunday tea. The main event was the Saturday dinner held in the dining hall for around 70 people. The AGM was at one stage held on Saturday afternoon but later switched to Sunday morning. Saturday night was generally spent in the dormitories of School or Sutton House with a few hardy souls in caravans and tents.

In 1961 the Sternians Charity Fund (later renamed Trust Fund) was started under a separate committee in order to assist (fee paying) parents with children at LWC who had fallen on hard times. In the early 1970’s the address lists were moved from old reproducing machines to a computer using punched cards and magnetic tape. This allowed the production of address labels and lists and also meant the centralisation of the records for the first time. This in turn led to a Registrar and Membership Secretary being added to the Committee in the 1980’s.

By the early 1980’s the impact on the Association was seen by the school intake mainly now being local and day or weekly boarders. Each year fewer and fewer leavers had a home address more than 30 miles from Long Sutton and this meant new blood for the more distant regions was quickly reducing . By this time regional reunions were only being held for the South, West and London and soon they were to disappear almost altogether as Long Sutton became the primary focal point supplemented by the occasional reunion in the regions. Of these the Bournemouth reunion became an annual event attracting the older ex-pupils. The emphasis at reunions began to move to those organised around specific year groups.

At about the same time, though Life Membership had been possible for a number of years, a new subscription scheme started known as LM12. This allowed co-operative parents to make 12 termly payments for their son or daughter while at school so that they would automatically become Life Members of the Association on leaving. With the arrival of 6th form only girls a similar scheme was started known as LM6’s.

In 1981 the Association’s first PC (an Amstrad 1512 DOS) was purchased and this later moved on to a Windows based network. The main purpose was to hold a database of addresses and other details required to handle a growing school population.

In 1989 the Association employed its first part time paid administrator in John Matson and established the principal of this job being done by mature and long serving school staff. In 2002 a part time assistant was also added. With the arrival of the Administrator a newsletter called The LINK was also produced and distributed twice a year.

In 1998 the Association’s first web site was launched. This was then re-launched in 2001 and fast became a major asset and a popular vehicle for communication. In 2004 The Association also acquired its first permanent offices above the dining hall. In 2005 the College decided to appoint its first Development Office Director whose primary aim was to raise funds to increase the number of foundationers at LWC. In 2006 it was agreed that LWC would fully fund the Sternians’ Association and that subscriptions would cease. At this point all past pupils of LWC and (Old) Gosden House became members of the Association.

(Acknowledgement is made to Stan Davies, 0274 1941 Hyde, for part of this brief history)

A detailed history of the Lord Wandsworth Foundation has been written by Hugh Podger and both hardback and softback copies are available to buy with all proceeds going to the Foundation. Go to Shop for more information.

In the office of the alumni officer (Gill Kelly) are held copies of the Sternian and Sower since they started publication along with other documentation and DVDs of school productions and CDs. If you have any memorabilia from your time at LWC that you are prepared to donate or have copies taken from then contact Gill Kelly in the first instance on 01256 860356 or at sternians@lordwandsworth.org

The Sternian archive contains some 1300 photographs of life at the College from 1926 to the present as well as magazines, books, programmes of College plays and items of clothing worn by some of the boys during the early years of the College. We are keen to preserve and enhance this history of the College in a material form for future generations, believing that one should not simply rely on the memories of those who were fortunate enough to be educated there.

We are now in the process of having archives digitised so that they can be searched online.  Do take a look here http://lordwandsworth.daisy.websds.net/ and let us know what you think.